I mentioned in a previous post that we raised several acres of tobacco. One of our fields had really long rows. They went from the barn to the road, probably five or six hundred feet, maybe more.

After the stalks grew to term, we cut them down to hang them in the barn. We bent the plant over at the base and cut it clean with one blow of the tobacco knife. At first we cut two rows at a time.

This is a tobacco knife similar to ours

I had to stand up after cutting twenty or so plants. The number of plants I cut before standing grew and grew, till I eventually bent down and didn’t come up till I was at the end of the row.

We started the day by, George and I, cutting four rows between us. After that I was the only one cutting and by that time I learned how to cut four rows at a time. George then joined dad spearing and I would cut till dad said, “That’s enough.” At that point I would join them spearing.

Spearing the tobacco involved another some what precise swing. We would stand a tobacco stick up, which was about five feet tall, and put a tobacco spear on the pointed end. Then we would reach down, grab a plant by the cut end, swing it up and slam it down onto the spear and slid it ground ward on the stick. We could fit five or six on the stick by spacing them apart properly. Air had to flow through them and cure the tobacco as it was hanging in the barn.

Ready to hang in the barn

I put my houseboat up for sale yesterday. If it sells, the money will go to the down payment, closing cost and moving expanses for the lot I have my eyes on.

My home for over two years

Today is my oldest son’s birthday, he is now forty three and a veteran.

My oldest son Jamie and my granddaughter Vera. 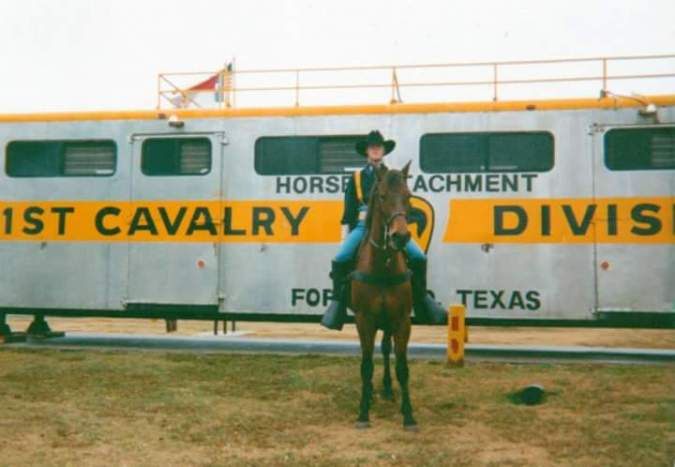 Jamie on his mount at Ford Hood, Texas in the mid nineties.

I am head long into the Atkins Diet and so far have lost eight pounds since October 31, 2016. The weight loss includes the four days I lost, due to artificial sweeteners.