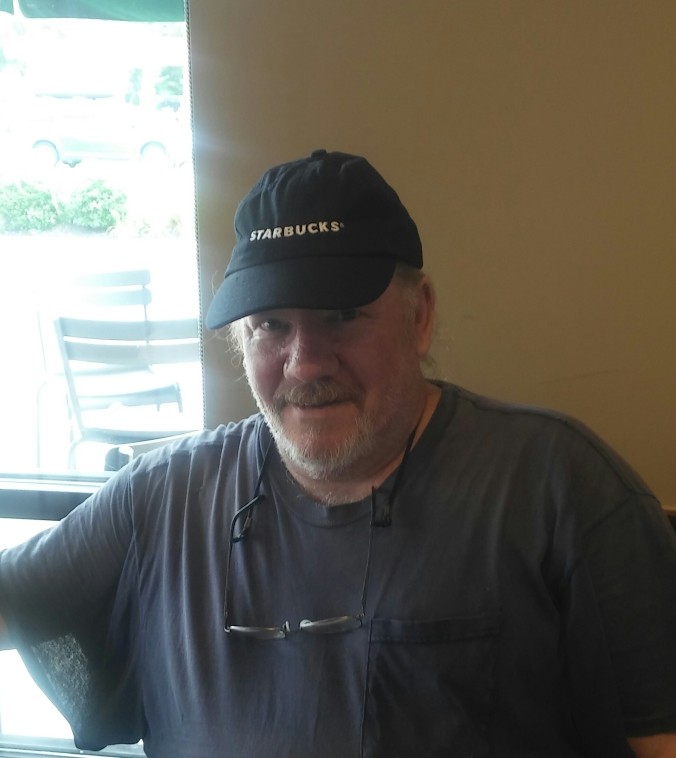 Yesterday I was visiting one of my favorite places, the La Plata Starbucks in Southern Maryland. The first place I look, when I walk in the door is to the left, at the corner, my corner. Good, no one was there, because that’s my spot, yep my spot. Of course it’s not really, but it seems like it is. I’m there all the time and the staff treats me like family, everyone makes me feel right at home. The corner receptacle receives my plug so often I’m about to install a mail box.

The other day Alvin walked over and gave me this hat and said, “Your paycheck will be here on Friday.” We both laughed as I took the hat, then we chatted for a while about Christmas in April, which is one of his favorite projects.

I said, “thank you so much for the hat. I’ll add it to my Facebook folder, How ya like my hat?”

“You don’t have to do that. You’re here so often, now you’re an honorary part of the crew.”

“It’s always good to feel a part of.”

I was trying to start a feature at Starbucks called Norm Day. It’s from the TV show Cheers, every time Norm would walk in the bar, everyone would yell, “Norm!” Well at Starbucks it would go like this: Once a week slow evening, picked by the owner of course, Starbucks would pick a name out of a hat, so to speak. Let’s say between five and seven, when someone would walk in the door the staff would yell the name of that day. If your name matched the name called you would get one free drink, no refills. However I can think of several ways the bad guys can cheat. So far it hasn’t grown any legs.

Actually, I asked Alvin for a hat and he gladly gave it to me.

5 thoughts on “How ya like my hat? Starbucks (true story)”