How ya like my hat? College of Southern of Maryland (CSM) hat

This picture serves two points. First it’s the hat of my local college, CSM, that I can proudly say I attended for several years at two different times in my life. Second it can serve as a before picture for my weight lose.

It was taken a year ago at the University of Maryland Charles Regional Medical Center, formally known as Civista Hospital. I was working with nurses and a physical therapist for my Chronic Obstructive Pulmonary Disease (COPD). 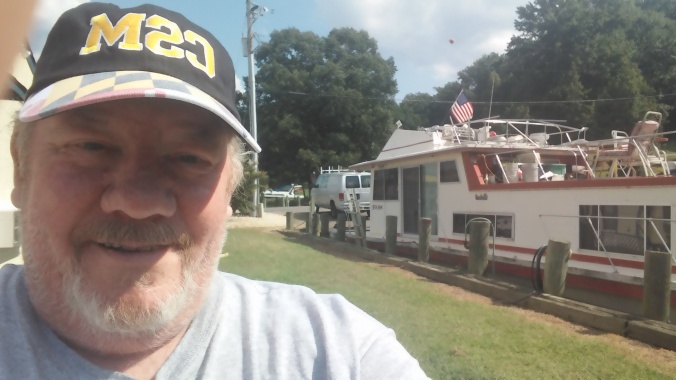 First point is, I went to CSM in ’92 when it was known as Charles County Community College. At that time I wanted to learn about computer security, but it wasn’t offered then. That left me still wanting the computer field, but with Computer Science as my major. Two years later, while still raising my sons, money became more of need, so I went back to carpentry.

In 2014, when I became disabled and couldn’t work in my field, so I went back to school, this time as an English major. I have a long way to go, but my desire is to learn how to write a novel. So far I can thank my professors, my friend Gwyn Warren and of course you guys for supporting and teaching me.

A year ago at a neighbour’s houseboat. I think her cat likes me.

The second point of the picture is my diet. Some of you guys know I’m losing weight. In this picture I weighed 286 pounds, now I weigh 259.

2 thoughts on “How ya like my hat? College of Southern of Maryland (CSM) hat”